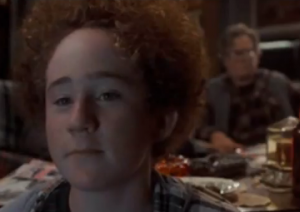 Not only does the following video make me laugh every time I see it, it also illustrates the difference between a traditional Scottish take on psychology and effects on the psyche compared to an American and more modern take on things.

I’m not sure that Scotland has moved much further forward. I still think it sees psychological scarring as rights of passage, much like some African tribes scar their faces.

Does it do us any harm?

I’m pretty sure it has done more harm to the Scottish people than the English ever did. As a race we have had to grow broad shoulders in order to carry all the chips.

The truth is, it’s not possible to talk to our children or anyone else in derogatory terms without it having an impact on their psyche. Sure it may make us tougher at some level, but ultimately less confident.

As it has become less acceptable to speak to our children this way, we have internalized, so we find that we speak to ourselves this way instead. A whole race of people muttering under their breaths to themselves “Ya total eejit, whit did you dae that fur. Oh I’m such an arse.”

Anyway enjoy the video. Notice how the American is aware that a complex is likely to be developed. It’s a fascinating comment on the Scottish psyche but it’s also very funny.